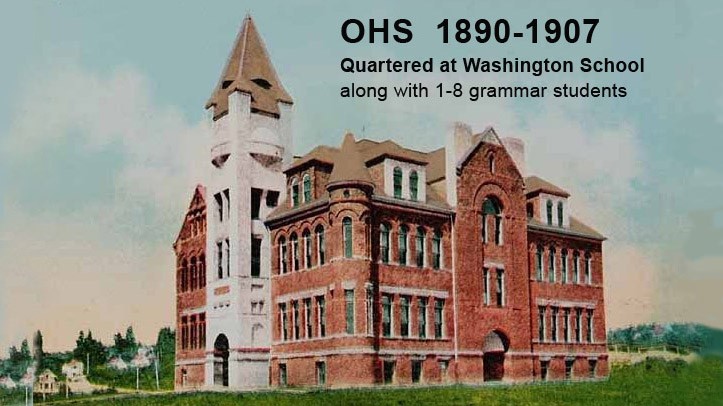 Olympia High School moved into quarters shared with elementary grades at Washington School in 1890, with this new building, which stood on the block now used by the Olympia Armory. This post card image was distributed heavily in the 1906-1907 era, entitled with the nickname “Washington High School.” That false handle was convenient for reasons of the day, but it was not true in the sense of this being a free standing high school that was called Washington High School. It was Washington School which housed “Olympia High School,” in an era when voters were not approving money for independent high schools. Independent high schools were non existent through the era OHS was housed here.

The false naming on the post card for “Washington High School” was purposeful, though, considered amid Olympia’s struggle to get the permanent capitol campus it was promised for more than 50 years. Olympia was fending off overreaching attempts from Tacoma to attract the permanent state capitol. In 1905, at the behest of the railroad lobbyist, the legislature passed a bill that would have moved the capitol to Tacoma, though promptly vetoed by Governor Meade.

Amid Tacoma’s bid for the capitol, the property and structure for Tacoma’s high school. That came in the form of the palace-like school now known as Stadium High School. With Tacoma pushing the standards of education civility, Olympia was playing catch-up as this school’s image was distributed to counter that Olympia was just as civilized.

1905 also brought the establishment of the first Washington Railroad Commission that preambled its existence in avowing that legislators were not permitted to ride railroads for free. This was the era of muckraking with view of the fact the railroads were king in transportation and used to running roughshod. 1905 brought establishment of the Olympia Chamber of Commerce and a two-year boycott led by Olympia businesses against Tacoma for scurrilous attempts to steal the capitol. Meanwhile, in 1905, Olympia’s football team was received at Tacoma’s docs with cool reception, amid spiteful yells continuing through the came, according to newspapers. Civic aspirations were fiercely embedded into Olympia High School in this era before the permanent capitol campus was built.

This Washington School served before electrification, the school’s image repeated twice over, built as Olympia’s first Lincoln School, and on the west side, the first Garfield School at Rogers Street and Madison Ave. 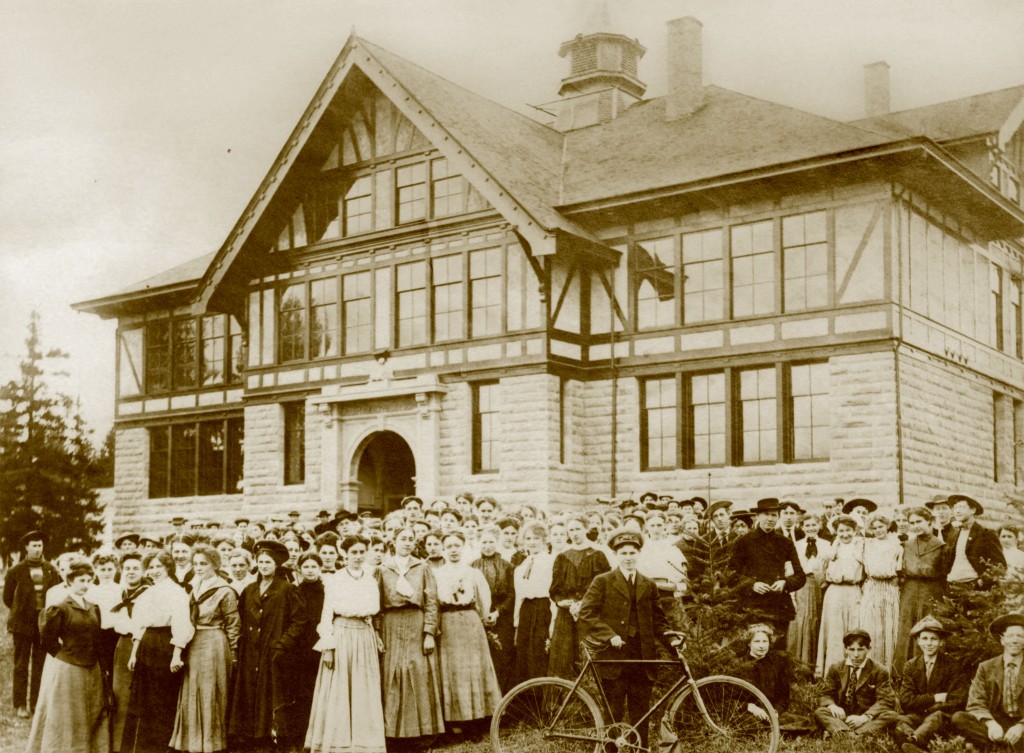 This photo was taken at a grand opening event at the end of April 1907, the event staged by the Olympia Women’s Club, which had agitated for years that Olympia High School be housed in its own building.

Located next to what is today’s Sunken Garden, this school pre-existed our current Capitol Campus. An interpretive marker stands on the site today. The crowd above is the Women’s Club of Olympia, long advocates of building a free-standing high school in Olympia. From 1882 to 1907, high school classes were added at a 1-8 school in Olympia. Construction by OSD was enabled when wealthy widow Mary McFadden Miller donated this block of land in 1906, stipulating that a high school would built and named for her late, illustrious husband, who was the first US official in “Northern Oregon Territory.”

Based in Olympia, William Winlock Miller served many government leadership roles in his short life (1812-1876). Miller was a huge player in the development of Washington Territory and American interests in the Northwest following British settlement at Nisqually. Widow Mary Miller can be credited with enhancing Olympia’s civic appeal in education at a time when the state’s decision for a permanent capital was not yet established.

Tacoma and railroad interests backed a bill in 1905 to establish the permanent capital in Tacoma, fortunately vetoed – then a year later Tacoma opened its first high school (now Stadium), built from the abandoned foundation of a palace-like hotel intended by the railroad. The civic rivalry was decided two years after Olympia built its high school – in 1909, the Legislature authorized construction of Washington’s permanent capital, while OHS stood proudly enshrouded by what would become today’s capitol campus.

From this picture’s perspective, the Insurance Building would later stand to the left, the Temple of Justice, right, and the Capitol Dome would loom directly behind.

The second William Winlock Miller High School (1919-1960) stood along Capitol Way between 12th & 13th Streets, the present site of the State Archives Building. Designed by Architect George Gove of Tacoma, and construction overseen by Olympia Architect Joseph Wohleb, the school stood along Capitol Way, across from the Capitol Campus, now known as the West Capitol Campus.

Until North Thurston High School opened in 1955, this school taught all of Thurston County’s high school students, excepting the southern reaches served by Yelm, Tenino, and Rochester High Schools. It boasted a huge auditorium and was the center of much community activity.

Unable to grow beyond the one block on which the building stood, the Olympia School District in the mid 1950s began siting a new high school building, at the site of the Cloverfields Dairy on Olympia’s boundary with Tumwater, the current incarnation of William Winlock Miller High School.

A commemorative work is proudly displayed at the southwest corner of where this building stood, near a crosswalk that, across Capitol Way from the Tivoli Fountain. Please pay a visit to this site and explore the historic roots of Olympia High School. 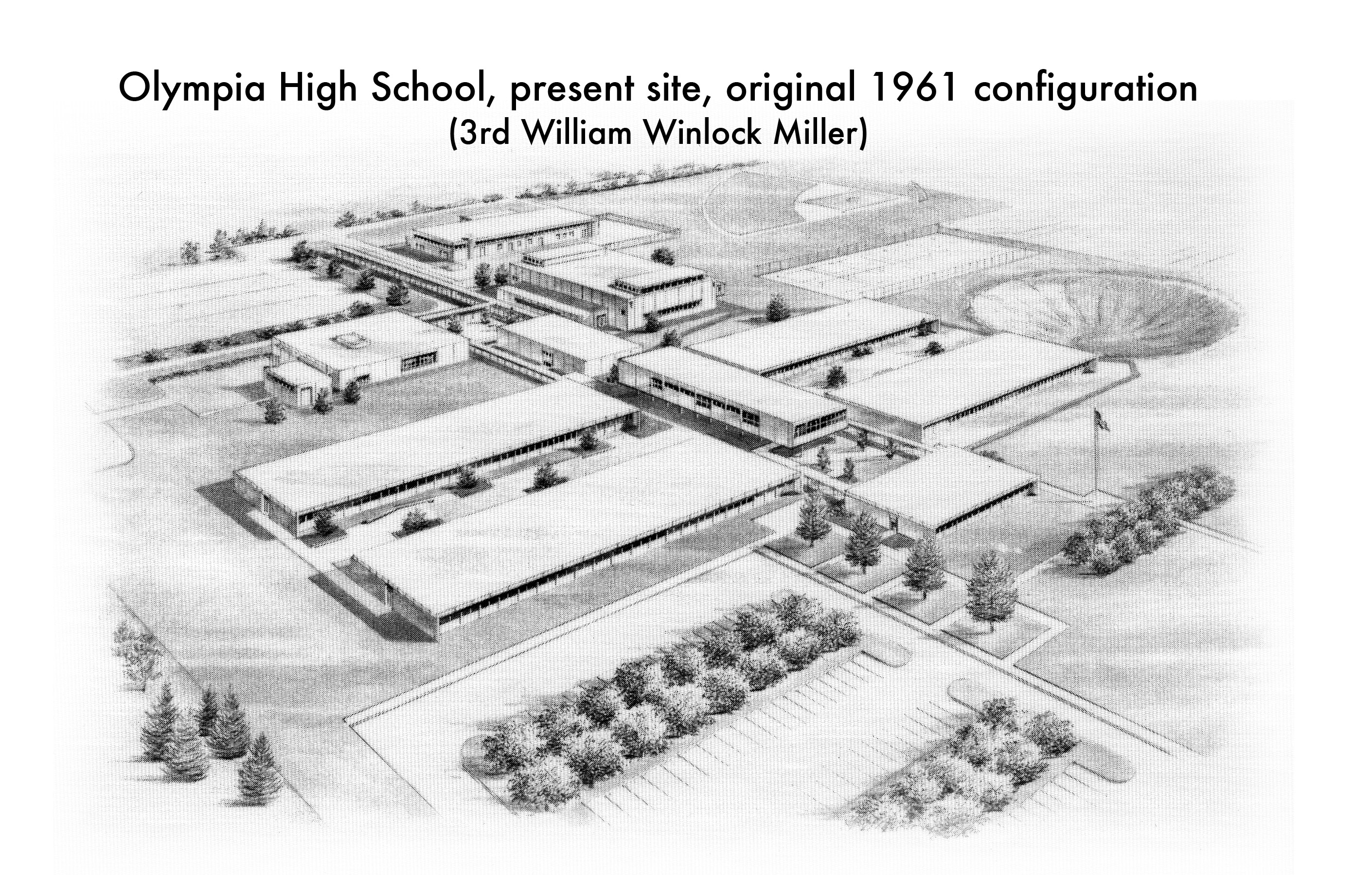 This 1961 campus on the former Cloverfields Dairy site between Carlyon and North Streets boasted nine buildings and an expansive campus, all main features following the school’s former location on Capitol Way across from the capitol campus. On the earlier campus, the school was confined to one block.

The school’s outdoor walkways between buildings was fine in good weather, but rain and wind exposure prompted nearly full enclosure of these buildings in the 1999-2000 campus renovation. 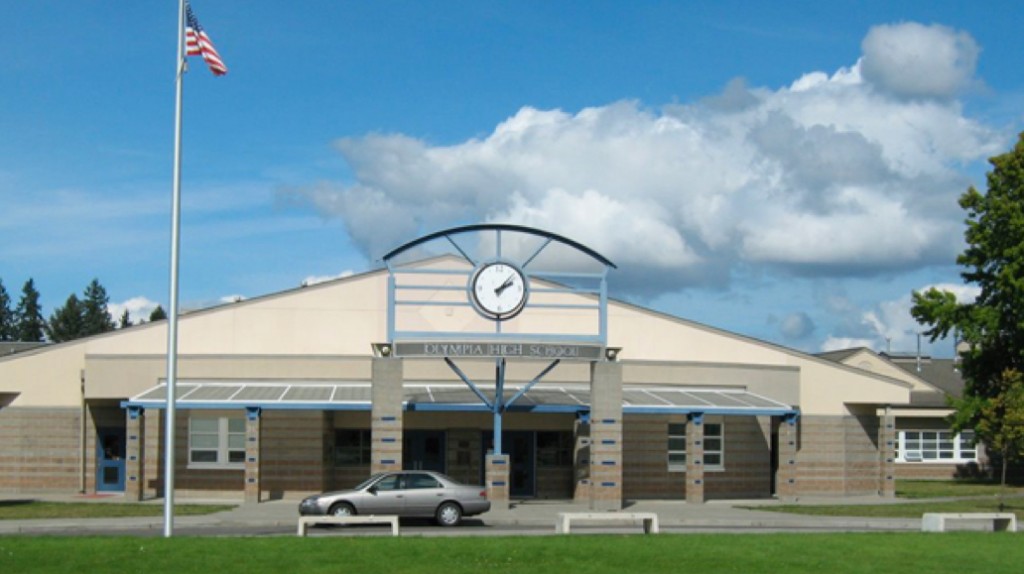 Olympia High School moved to the former Cloverfields Dairy at the edge of Tumwater, officially opening the doors in February 1962. Since the Capitol Way campus met the wrecking ball as soon as the class of 1960 graduated, and the new campus was not ready to open due to delays in construction, local churches helped house classes while the building awaited completion.

The original configuration of this campus featured a nine buildings all one floor except the library. The expansive campus gave relief to the formerly the tight quarters feel at the former campus that stood on only one square block.

This campus was reconfigured in 1999-2000, enclosing the buildings that were formerly separated. The change eliminated a breezeway feel between buildings, especially a factor in Washington’s rainy season.